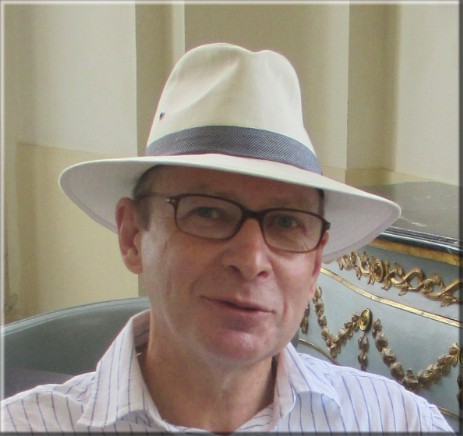 I am a philosopher (Emeritus Professor of Philosophy, University of Central Lancashire, UK), an author, and, in the background, alas, always in the background, a low-key singer-songwriter-acoustic-guitar-player. Photo: Turin, 2015
These days I work as an independent scholar, writer, and occasional lecturer, based in the UK's lovely Cotswolds, where I live with my wife and fellow philosopher, Isis Brook.
On this site you will find information on and samples of my philosophical work as well as solo acoustic home demos of some of my songs. See also my UK Amazon Homepage or my US Amazon Homepage.
The essence of the ideas I have been developing in a few short paragraphs:
My published work has focused for some time now on my own approach to the development of what I have labelled "General Ethics" (capital "G", capital "E"). By this term I mean the development of a single, integrated approach to ethics that encompasses the realms of human ethics, the ethics of the natural environment, and the ethics of the human-constructed (or built) environment.
I refer to my own approach to General Ethics as “the theory of responsive cohesion”. This approach proceeds from the idea that the ultimate basis of value is not to be found where most other ethicists have looked for it, which is to say at the relatively high level of certain kinds of value-conferrring powers or capacities that certain entities possess (such as rationality or sentience), but rather at the much more basic level of structure or organization.
Specifically, I argue that the most valuable kinds of things in general typically exemplify the relational quality of responsive cohesion, that is, they hold together (or cohere) by virtue of the mutual responsiveness of the elements that constitute them (where "responsiveness" is construed very generally here to include both literal and metaphorical senses of the term, so this idea applies as much to art and architecture as it does to living and social systems). Responsive cohesion contrasts with the other two basic forms of structure or organization I identify, namely, fixed cohesion, in which "things" - from thoughts to bodies to buildings - hold together alright, but do so in regimented, template-driven, forced, or otherwise non-mutually responsive ways, and discohesion, in which things fail to hold together well or at all.
The theory of responsive cohesion develops the idea that responsive cohesion represents the foundational value (i.e., the most basic general value we can find) into a sophisticated ethical system. A crucial element of this developed ethical system is the theory of responsive cohesion's normative theory of contexts, which comprises an argument for respecting more inclusive responsively cohesive contexts over less inclusive responsively cohesive contexts or items (thus, human social systems should be made to fit in with the biospherical system rather than vice versa, and human-constructed things, such as buildings, should in turn be made to fit in with biospherical systems and human social systems rather than vice versa).
Closely related to my work on ethical concerns in regard to the human and nonhuman natural worlds, I have also been working on the nature of the interior lives of humans and other animals, particularly in regard to the cognitive infrastructure necessary for sophisticated communication (i.e., capacities like joint attention and theory of mind), the nature of genuine language, the significance of language to the constitution of a being's interior life, and the forms of harm that can apply to linguistically vs. non-linguistically enabled beings.
My books include:
.... and a rather different kind of book:
My main university teaching has been in the areas of ethical theory (i.e., normative ethics and meta-ethics), applied ethics, environmental ethics, the philosophy of conservation, the philosophy of mind, the nature of the interior lives of humans and other animals, and the tangled trio of free will, determinism, and moral responsibility. I have also lectured or given papers internationally to a wide range of university and broader general interest audiences in countries ranging from Australia, Austria, Bermuda, England, Finland, Germany, Greece, and Italy to Japan, the Netherlands, New Zealand, Scotland, Sweden, and the US.